Get the loudest and most effective security & emergency whistles for emergency situations, even crowd control. Although used by law enforcement, they can also be used as a distress signal for life saving instances. More importantly, they can attract attention whenever you need to deter possible assailants. These will allow rescuers to find you very quickly. Most of these whistles if not all of them are compact and allows the whistle to immediately drain, sound off automatically, and prevents jamming or freezing up. Get your very own and keep yourself safe when out on the streets or by yourself. 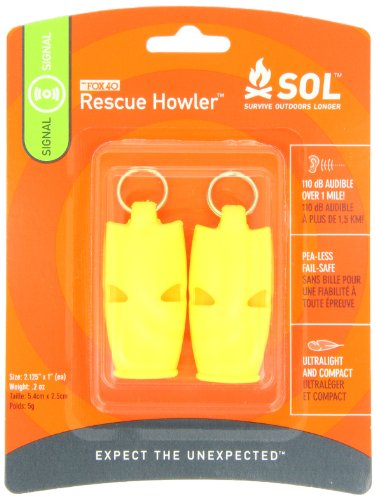 Broadcast your position when lost in the wilderness with the Survive Outdoors Longer Rescue Howler Whistle. Signal others from over a mile away with this piercing, dual-frequency 110-decibel rescue whistle. Made with a dual-chamber, fail-safe, pea-less design, this whistle works in all weather and won't freeze or stick to lips when cold. Made from unbreakable ABS plastic, this whistle is dependable for a lifetime of trouble-free use. Keep this whistle with you on all of your outdoor adventures and clip to a zipper, wear on a lanyard, or slip into a pocket for quick access in unexpected situations. Each pack contains two rescue whistles. 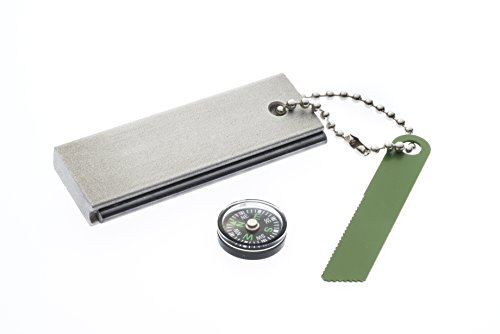 Why waste time and energy finding kindling with regular firestarters that may or may not even catch a spark?! Regular twigs and branches in their natural environments will not light unless they are extremely dry. With this reliable pocket-sized tool, you will always be ready to start a fire. Our SE FS374 2-IN-1 All-Weather Magnesium Firestarter Kit comes complete with a solid compact magnesium bar that can be used hundreds of times, or until the magnesium runs out. Simply shave some magnesium into a pile and easily spark the shavings (yes, even in wet or humid surroundings). The shavings will quickly spark into a flame so you can ignite larger pieces of wood. Waterproof, weatherproof, and built for long-lasting durability—this is an essential addition to your supplies for boating, camping, emergency and survival, hiking, and hunting.As a bonus, we have included a mini compass to help supplement your navigation needs. PRODUCT FEATURES:-Overall dimensions: 3” x ?” x 1”-Solid magnesium body (silver color)-Black flint striking rod-Serrated metal striker-Mini compass—size: 4.5 mm x 20 mm dia.-Detachable silver ball chain link HOW TO USE:1 – Gather tinder (bark, dry branches, grass, lint, paper, pine needles, etc.) of the preferred size/amount.2 – Use the serrated edge of the striker to scrape along the length of the magnesium rod to create shavings.3 – You can either sprinkle the magnesium shavings throughout the tinder pile, or scrape the shavings into a cluster to the minimum size of a U.S. quarter coin.4 – Then hold the flint at an angle over the pile, while forcefully sliding your striker along the length of the flint to create sparks.5 – Continue to slide the striker against the flint until the sparks land directly onto the shavings pile and ignite a flame. PLEASE NOTE:For first-time use, stripping the protective layer of paint from the striker before starting your fire will help produce the best results. SE is committed to providing the customer with the best source for value possible. You will enjoy the quality, function and usefulness our SE FS374 2-IN-1 All-Weather Magnesium Firestarter Kit has to offer. IMPORTANT:Avoid receiving counterfeit items. Genuine SE products come with our SE logo on the packaging. SE is a registered trademark protected by US Trademark Law. 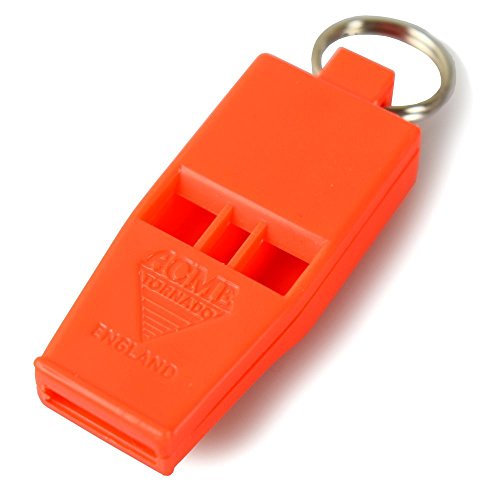 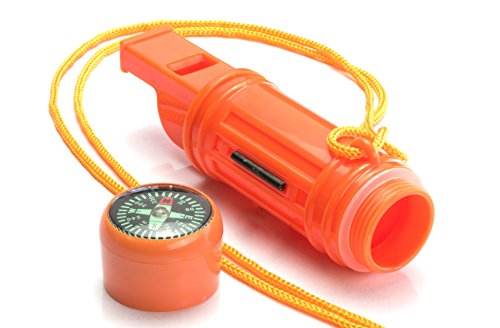 SE is proud to present our 5-in-1 Survival Whistle. This item can easily fit into your backpack, purse, or survival pack for easy storage and transportation. You can hang it from your gear, neck, or wrist with the lanyard. SE is committed to providing the customer with the best source for value possible on the market. You will enjoy the quality, function and usefulness of our SE 5-in-1 Survival Whistle. IPR Rights Notice: Important: Avoid getting counterfeit items. Genuine SE products come with the SE logo on the packaging. SE is a registered trademark protected by US Trademark Law. 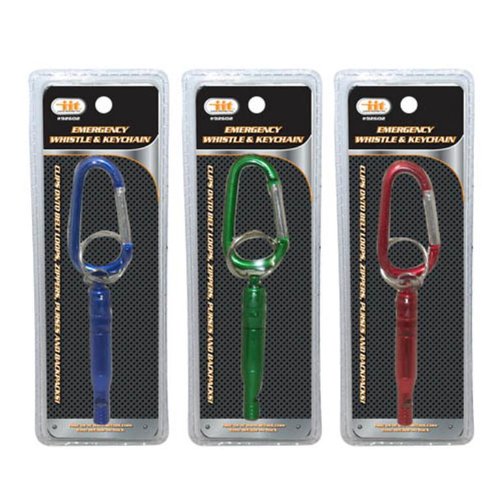 Established in 1991, JMK-IIT has been manufacturing and marketing tools for over 18 years. We are a leading wholesale supplier to the hardware, home improvement, automotive, farm supply and retail markets. Being first to market with innovative new tool concepts has always resulted in additional sales and profit for our customers. 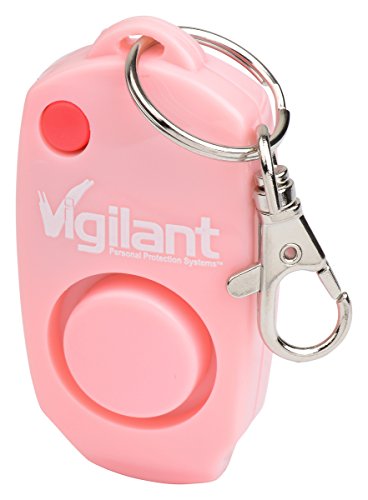 The PPS23 keychain model is a special edition version of our popular PPS23 series. For this special limited edition unit, in addition to the colors available (black, pink, green, yellow and red), we've included a keyring and a bag clip. We believe this unit is the ultimate personal alarm for purses, backpacks, and car keys. The PPS23 is a dual function emergency attack alarm. It features a 130dB alarm, which is one of the loudest personal alarms sold by Vigilant. It is also the only alarm sold by Vigilant to include a backup feature - it has a security screamer whistle built into the end of the alarm that serves as an emergency backup alert mechanism in the event of battery failure. The alarm is activated by depressing the button on the front of the alarm, but a different button on the back of the unit is the only way to deactivate and silence the alarm. In situations where seconds make a difference between life and death - the ease of activation combined with the "hidden" off button make this alarm an easy to use, and hard to defeat personal alarm. Personal alarms are one of the fastest growing segments at retail in the self defense industry, because an attacker's worst enemy is attention. Personal alarms are legal to carry in all 50 states (even on airplanes!) and are a very safe method of self defense. They require no training or skill to operate, and can be used by anyone regardless of age or physical ability. Victims are often too traumatized to shout for help in unfamiliar and dangerous situations, increasing their vulnerability. Criminals do not like to draw attention, and will likely run off when they realize the alarm cannot be stopped.The PPS23 is particularly suitable for teenagers, parents, night owls, delivery route employees, business owners, and college students. Joggers, walkers, and bicycle riders may enjoy the backpack/purse clip for hands MACE is a registered trademark of Mace Security International, Inc. 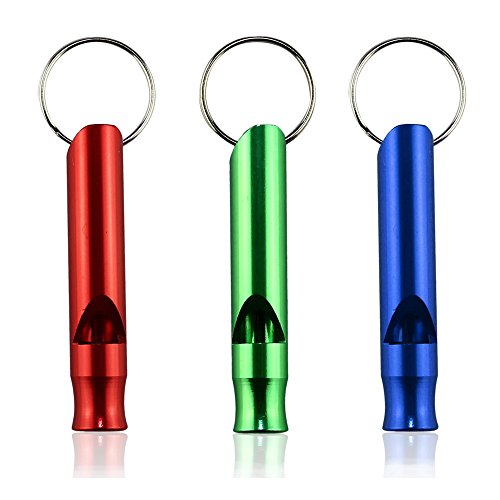 Features: 1.Assorted colors available 2.Loud whistle, great for sporting events, camping & hiking,boating. 3.Length:6cm 2.36" 4.Material:Aluminum Description: 1.Loud whistle can be heard for far distance 2.Looks like little item,but potentially important one, this Emergency Whistle & Keychain could be a life-saver. 3.This tool is ideal for camping, boating, fishing, hiking and other outdoor activities 4.Brightly colored easy to find it when you need it. 5.Key ring for attachment to a lanyard or keys. Package content: 3 x Aluminum Whistle Attention: The whistle is for Emergency Hiking Camping Survival, not a toy minimun age above 6 years old . 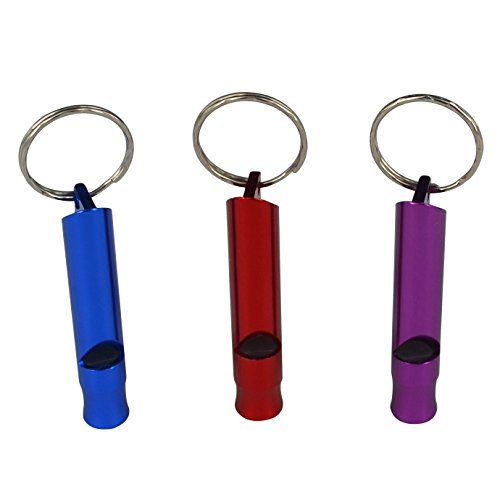 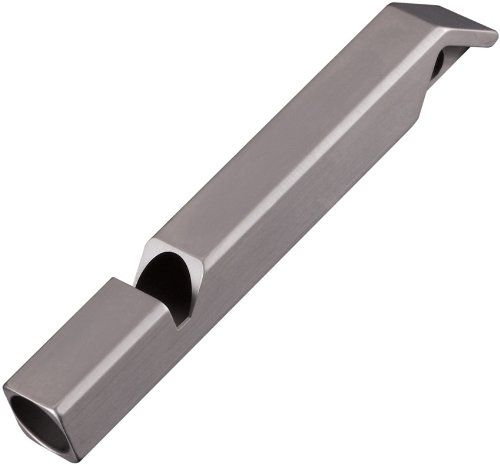 This is made from a solid block of titanium alloy, so there's no moving parts, and nothing to lose or replace. The small, streamlined air pipe is easy to blow and will produce a much louder sound with less effort. This means you can blow this whistle for longer periods without exhaustion. 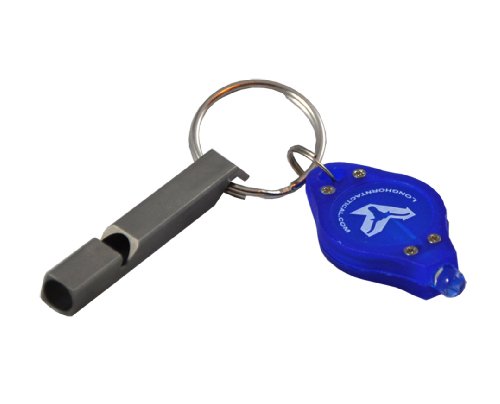 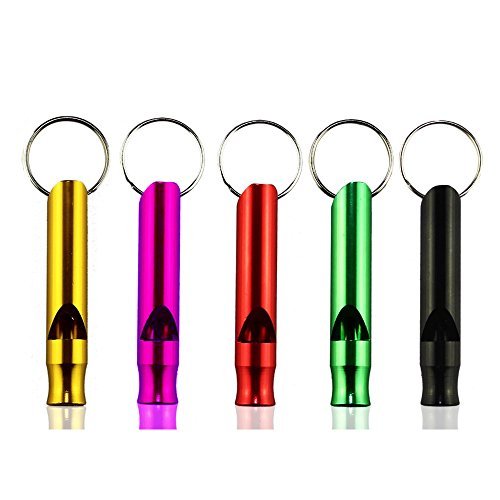 Emergency safety whistle keychain is great for any situation and it lets out quit a blast. Great for boating, camping, hiking personal safety, and geocaching. Features:Lightweight and great buoyancy.Whistle for emergency use.Zipper design for more security guarantees.Straps with durable buckles can be adjusted to fit your size. 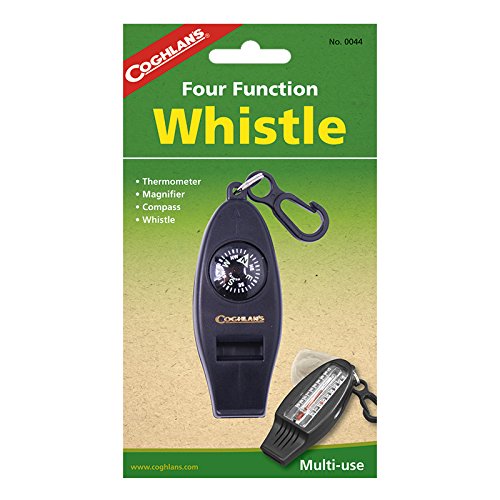 Keep yourself safe while camping or backpacking with this four-function whistle from Coghlan's, which features a magnifier, compass, and two-scale thermometer. A handy tool for backcountry treks, this shrill-sounding safety whistle also has a convenient lanyard with clip. Coghlan's makes the outdoors more comfortable and enjoyable with over 450 accessories for camping, hiking, fishing, and RVing -- from cooking gear to first aid kits, insect netting, firestarters, tent repair, and more. 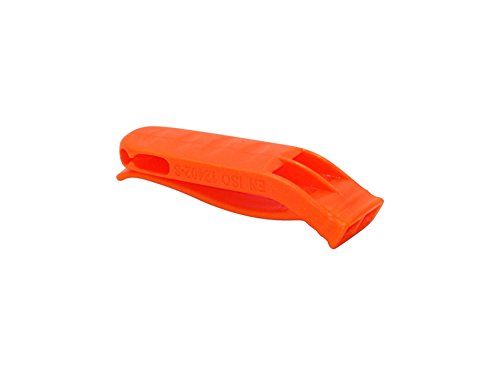 The Aqua Marine Rescue Whistle is powerful, rugged and reliable. Designed for extreme conditions in the toughest marine environments this whistle is suited for any environment. Made from high-impact, heavy duty plastic,. There are no metal or moving parts to break or corrode. The ultra-loud, two chamber design allows for the highest sound possible. The built-in clip allows for placement virtually anywhere and with the lanyard hole you can strap this whistle to any piece of gear. Perfect for the track coach, swim coach and everyone that ventures outdoors. We hope you'll never need to use it, but in an emergency you're sure to know it works.